Philosophy of the Book

Existing textbooks on corporate governance tend to have a strong focus on UK and/or US corporate governance. This focus is somewhat surprising as the UK and US corporate governance systems have features which clearly set them apart from pretty much the rest of the world. Indeed, the typical British and American stock-market listed firm is widely held (held by many shareholders) and control therefore lies with the management rather than the shareholders. In contrast, most stock-exchange listed firms from the rest of the world have a large shareholder whose control is substantial enough to have a significant influence over the firm’s affairs. Given these marked differences in ownership and control, corporate governance issues emerging in non-UK and non-US firms tend to be very different from those that may affect British and American companies. Hence, it is important for a textbook to bear in mind the diversity of ownership and control across the world in order to provide a holistic overview of corporate governance issues across the world. Indeed, there is no single way of – or system for – ensuring good corporate governance. Further, while national and cross-national regulators over the last two decades have advocated the superiority of the Anglo-American approach to corporate governance, the 2008 financial crisis highlights that there is no perfect system and that each system has shortcomings which may result in spectacular corporate failures.

Importantly, this global perspective is adopted throughout my textbook and is not just limited to a particular part of the book or individual chapters. The adoption of a global perspective is not only important given the nature and diversity of corporate governance, but is also paramount given the increasingly international character of student bodies in most universities (including MBA programmes).

Finally, an effort has been made to convey to the reader the leading edge of knowledge in a given area of corporate governance in an objective and unbiased way. For some areas, the evidence is as yet inconclusive. Rather than proposing unfounded conjectures or taking the approach adopted by regulators as the (only) way forward, this book clearly spells out the lack of knowledge in a particular area. While in some cases this lack of knowledge may be frustrating to the reader, the alternative of lulling the reader into a false sense of security is perceived to be worse.

To summarise, my textbook adopts a global perspective, reflects the multidisciplinary nature of the area and provides a critical review of existing institutional and legal arrangements.

Synopsis of the Subject Matter of the Book

The book is divided into the following five parts: 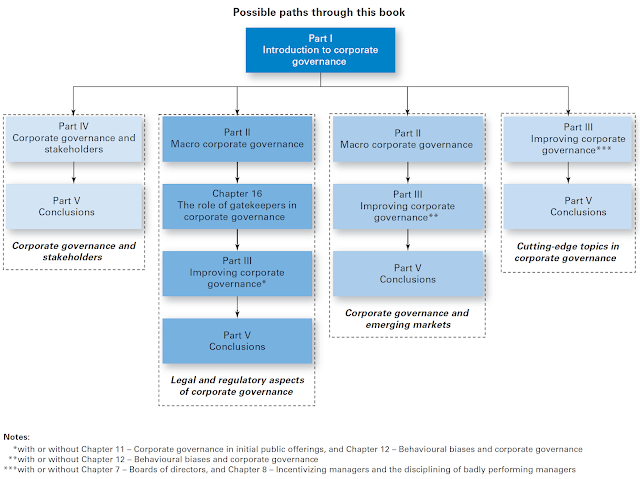 Part I introduces corporate governance. Lecturers who wish to cover the basics of corporate governance, without going into too much detail, may concentrate on this part. This part reviews the various definitions of corporate governance and discusses the main theories, including the principal-agent model. It also reviews the patterns of corporate control across the world, highlighting the differences between the UK and USA on one side and the rest of the world on the other side. While in the UK and the USA there is normally no or little difference between control and ownership, in the rest of the world there is often a major difference between the two. It is important to be aware of such deviations between control and ownership as they generate particular conflicts of interests which would not emerge otherwise. Both the differences in corporate control and deviations between ownership and control create conflicts of interests in most corporations which are very different from the conflict of interests at the basis of the principal-agent model. Hence, the principal-agent theory has only limited applicability across the world.

Part III focuses on the ways to enable good corporate governance within countries as well as within individual corporations. This part starts with a chapter on the board of directors. Given the importance that various regulators and codes of best practices – as well as academic research – have attached to this corporate governance mechanism, it deserves its own chapter. The following chapter focuses on the other corporate governance devices that are employed across the world to ensure that managers create shareholder value. The next chapter deals with corporate governance in emerging markets. Emerging economies are often dominated by crony capitalism such as inherited wealth and political interference in corporate affairs, both of which make improvements in corporate governance particularly challenging. This chapter will also discuss the role of stock markets in economic development. The following chapter then reviews the ways and means by which individual companies can deviate from their national corporate governance standards by offering their shareholders and other stakeholders better protection against expropriation by the management and large shareholders. Such means include cross-listing on foreign stock markets, cross-border mergers and (re)incorporations in foreign countries or other federal states of the same country. This part also includes a chapter on corporate governance issues faced by firms that are in the process of going public and or have recently gone public. These firms suffer from issues such as the pronounced asymmetry of information between insiders and outsiders. They also have stakeholders, such as venture capitalists, that are not normally present in more mature firms as well as CEOs that are typically more powerful than their counterparts in more mature firms. The final chapter covers behavioural issues, such as excessive loyalty of the board members to the CEO (or the major shareholder) and managerial overconfidence or hubris.

Part V concludes the book by drawing the lessons from the previous chapters, identifying the challenges that those concerned with improving corporate governance face and by proposing ways forward. To be effective, markets need good governance. Recent events have shown that bad market governance – in particular bad corporate governance – has not only negative effects for the markets concerned, but has also much more wide-ranging and devastating effects on wealth distribution and social justice for society as a whole. In other words, corporate governance failures tend to not only result in the expropriation of the shareholders of the immediate corporations concerned, but also affect other economic actors and stakeholders such as debtholders, taxpayers, consumers and job-market participants.

More information about the book can be found here.

Popular posts from this blog

May 08, 2018
This module is intended for advanced undergraduates in business and management, accounting, finance, or economics, and Master students. The module is delivered over a total of 24 hours of lectures with a flexible format including traditional lectures, class discussions of the end-of-chapter questions in Goergen (2018) and the multiple choice questions (see below).  AIMS OF THE MODULE This module aims to introduce you to recent developments in the theory and practice of corporate governance. The module adopts an international perspective by comparing the main corporate governance systems across the world.  LEARNING OUTCOMES OF THE MODULE On completion of the module you should be able to: Evaluate the current state of corporate governance in an international context; describe differences in corporate control and managerial power across the world; assess the potential conflicts of interests that may arise in various corporate governance environments; critically evaluate the effec
Post a Comment
Read more

Prof. Marc Goergen
Marc Goergen is a full Professor in Finance at IE Business School. Previous appointments include UMIST and the Universities of Cardiff, Manchester, Reading and Sheffield. Marc is also a Research Associate of the European Corporate Governance Institute. His research interests include corporate governance, initial public offerings, dividend policy, insider trading and private equity. Marc has published extensively in academic journals, including the Journal of Finance, the Journal of Corporate Finance, and Industrial Relations – A Journal of Economy & Society. Marc has written two research monographs as well as a textbook on corporate governance, which is now in its second, 2018, version. He has won several best paper prizes, including the Standard Life Investments finance prize for the best paper in the European Corporate Governance Institute Finance Working Paper Series in 2011/12.