THE CADBURY CODE -- A BLESSING OR A CURSE?

It is now more than 20 years since the Cadbury Committee's Code of Best Practice, commonly known as the Cadbury Code, has been published. While at first its focus was on financial fraud as a reaction to corporate scandals such as Coloroll and Poly Peck, its remit was extended after the Robert Maxwell and BCCI scandals. A common feature of most of these scandals was a domineering chief executive officer (CEO) combined with a weak board of directors.

This kind of problem is commonly referred to in the academic literature as the principal-agent problem. This problem arises in widely held firms that are owned by many small shareholders who tend to be passive and who tend not to get involved in the running of the firms they have invested in. This problem is effectively caused by conflicts of interests between the managers (the agents) and the shareholders (the principals). While the managers are expected to run the firm in the interest of the shareholders, they may prefer to pursue their own interests.

So how did the Cadbury Code try to reduce these conflicts of interests between the agents and principals? Weirdly enough, it did so by introducing (or more precisely reinforcing the role of) another type of agent, the non-executive director. Indeed, the Cadbury Code (Section 2.5) defines corporate governance as follows:

Effectively this means that the Cadbury Code turned the principal-agent problem into a principal-agent-agent problem. In other words, whereas initially firms were supposed to be run by executives who looked after shareholder interests firms from now on were about non-executives whose role was to ensure that the executives did exactly that. Why would the non-executives do a better job than the shareholders (and/or the executives)? Put differently, why would they be more responsible than the executives? This a very good question. If one studies the literature on the impact of non-executives on firm value and firm performance, there are very few studies that find an impact (whether positive or negative) of the non-executives on firm value. There is a review of that literature in Section 5.6 of my new book International Corporate Governance.

Well, you could say that academics are not always right and that frequently they are removed from what happens in the real world. Let us now take a time machine to early 2007, when Northern Rock plc published its 2006 annual report and accounts. On p.13 (forget about superstition!) of the annual report, it is stated that:

"For the period 1 January 2006 to 31 December 2006, the Company [Northern Rock plc] complied with all aspects of the Combined Code and with the 2005 Turnbull Guidance on Internal Control (Turnbull Guidance)."

"Both individually and collectively, [the non-executive directors] provide scrutiny of the performance of management and the reporting of its performance."

How could such an exemplary follower of the Code fail so miserably so soon? Indeed, Northern Rock was the first UK bank to experience a bank run for about 150 years. Without going into too much detail here, Northern Rock's business model had been highly risky relying on the availability of short-term financing (via the money markets) at low interest rates. More importantly, despite a strong or highly independent board, Northern Rock saw its demise in 2007. Returning to the above quote from Northern Rock's annual report, it is important to note that this is very close paraphrasing of the 2006 Combined Code which states on p.3 that:

In line with the academic literature, when I teach corporate governance I refer to two and not just to one role of the non-executive directors. Indeed, their role is not just to scrutinise the performance of the executives (or to monitor the latter), but also to provide advice. In fact, an emerging body of research suggests that, for some types of firms, less rather than more board independence may create value. See for example Renée Adams and Daniel Ferreira's paper on friendly boards. These would be firms where the advisory role of the board of directors is more important than its scrutinising or monitoring role. My own research with Salim Chahine from the American University of Beirut suggests that social ties between the management and the board of directors create rather than destroy firm value. Again, this would suggest that friendlier boards rather than more independent boards are
appropriate for firm where guidance is important for the management.

I am not necessarily suggesting that more guidance of the management by the non-executives would have prevented the collapse of Northern Rock. Rather what I am trying to convey is that corporate governance is much more complex and that it clearly cannot be reduced to boards of directors or board independence. Also, an important lesson is that definitely "one size does not fit all". What might be best practice in corporate governance for a certain type of firm may actually be worst practice for other types of firms.

In the aftermath of the financial crisis, several reviews (e.g. Walker Review) of the UK corporate governance regulation were conducted. However, they all pretty much concluded that the UK approach was still pretty much valid (see e.g. p.8 of Walker Review). Is it not time now to review the UK's approach, maybe by adopting a more evidence based approach?

See also one of my keynote addresses on why we need to revisit UK corporate governance regulation.

Legal disclaimer: This blog reflects my personal opinion and not necessarily that of my employer. Any links to external websites are provided for information only and I am neither responsible nor do I endorse any of the information provided by these websites. 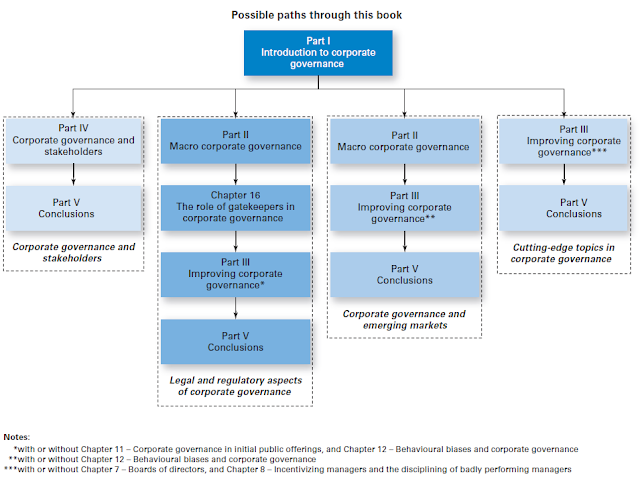